You are here: Home / Birds of Prey on Holy Island

Photographers on Safari are always looking for new venues that will provide new & different photographic opportunities for their clients. Photographing Birds of Prey on Holy Island in Northumberland is certainly very much in contrast to the more commonly used countryside locations. The resulting photographs will offer a refreshingly new bias to your existing collection. You may well also learn some new photographic techniques during your time here. Our subjects will all be British birds, although not all of them would be naturally found on the Island.

Holy Island, also known as Lindisfarne, is a delightful, unspoiled, historic island that attracts over 650,000 visitors a year. It is steeped in history and has an outstandingly beautiful castle and some spectacular coastal scenery. Just 160 people live here, and the venue has extremely busy periods as well as very quiet periods. By reading the paragraph below, you will see that we have carefully chosen the very quite periods. These occur during the middle of the day in two-week cycles.

We will take a Short-Eared Owl across to the island and our workshop will begin by photographing this stunning bird in the dunes area. Short Eared Owls live on Lindisfarne throughout the year, so your photographs will have a truly authentic feel to them. Wild Short Eared Owls can sometimes be spotted perching on posts or trees amongst the Marram grass around the dunes. They often frequent this area and it is here that we will choose for our natural settings. Captive Short Eared Owls are very few and far between, so it is quite rare to get the opportunity to photograph these birds in truly authentic surroundings. We will spend a considerable amount of time with this very special bird before moving on to the main part of the island where we will continue with our other species.

Holy Island is a tidal island, and access is by a paved causeway that floods twice every day. This means that access to the island is not possible for two periods of 6 hours in any 24 hours period. Almost all of the 650,000 annual visitors spend their time on Lindisfarne during the time when it is safe to cross, returning to the mainland while access is still possible. We will obviously travel to and from the island during the safe crossing periods, but our time on the island will include the 6 hours when it is unsafe to cross. We will effectively be “trapped” on the island for that time, but incredibly we will have the island virtually to ourselves for our photography sessions.

Lindisfarne is famous for both its medieval religious heritage and its picturesque 16th century castle. The priory was the epicentre of Christianity in Anglo Saxon times. It was built under the supervision of St. Aiden in AD635. It was regularly attacked and harassed by Vikings until a particularly bloodthirsty & murderous incident in AD793. It was then abandoned as a monastery for some 400 years. The monks returned in the 12th century until the “dissolution of the monasteries” in 1537. The castle was built on top of a volcanic mound using stone taken from the abandoned monastery in 1549, and was used as a garrison until 1819. The castle’s main purpose was to defend English ships that were sheltering in the harbour during periodical skirmishes with Scotland. This iconic edifice will make a fantastic backdrop to a number of your photographs.

Holy Island is home to a tradition of fishermen using redundant herring boats as storage sheds for their nets and other equipment. There are a number of these huts on the island in various states of repair. When fishing for Herring became less viable, boats were pulled ashore onto the beach and sawn in half. The hulls of the boats were turned upside down and covered with a waterproof tar sheet. Much of this sheeting has since rotted away and the remaining sheds, in various states of disrepair, make excellent perches and backdrops for our birds.

There is currently a fleet of 8 fishing vessels based in Lindisfarne. These boats mainly fish for Lobster & Crab. Mussels from Holy Island are also much sought after in recent times. There are several stacks of brightly coloured fishing pots and various coils of old rope on the island that make excellent perches for our birds. There is also a number of old and rotting boats on the shore. The rotting timbers on these have some amazing textures and tones while some of the old rusted metal machinery on the boats has equal appeal. Then there are the old rusty boats’ anchors……………..

There is a lot more than fishing related props that we will use during our time on Holy Island. There are beautiful stone walls and crevices, which really lend themselves to the Barn Owl. There are fence posts and gates that we will use and some colourful rocky areas. We can shoot towards the sea or we can chose to use the castle as a backdrop. There are also some areas with long grasses and pretty flowers. The opportunities are endless.

We will use all resident British Species of Birds of Prey. We will take up to 6 birds with us. We cannot take every bird listed but will take a selection from the following; Little Owl, Tawny Owl, Barn Owl, Long Eared Owl, Eagle Owl, Common Buzzard & Kestrel. Birds in flight are not the focus of this workshop and all our subjects will be perched in a variety of picturesque settings.

Everyone will receive a general talk on Digital Photography prior to the workshop. This will be followed with specific techniques more relevant to the day’s shoot. Ongoing help or advice will be offered to anyone requiring more assistance throughout the day. In the absence of bright weather, balanced flash techniques specific to wildlife may well be employed. This enables you to achieve darker skies and backgrounds while retaining good, natural detail in your subjects.

09.30 Meet and greet. Teas / coffees.
09.45 Group tuition and safety briefing
10.30 to 1.00 Photograph Short Eared Owl perched in natural locations in the dunes and beach area. One to one tuition as required.
1.00 to 1.40 Lunch (sandwiches and drinks provided)
1.40 to 4.00 Photograph various birds of prey perched in photogenic locations on Lindisfarne Island around the harbour using various props and backdrops. Tuition as required. N.B. Times will vary on a daily basis subject to tides. 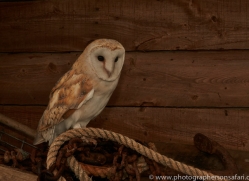 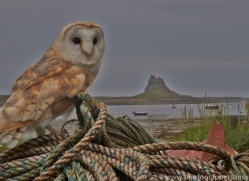 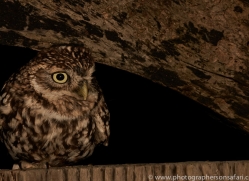 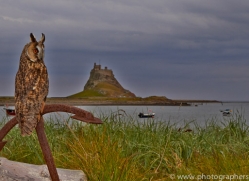 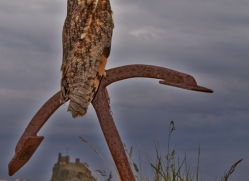 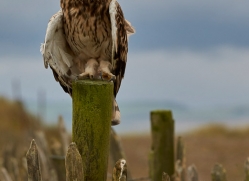 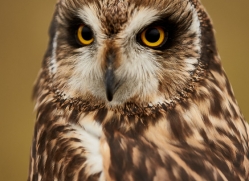 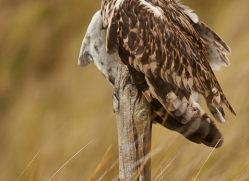 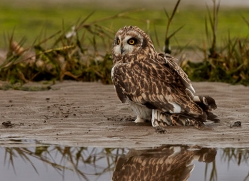 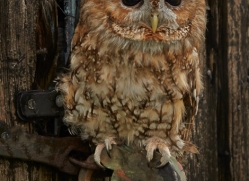 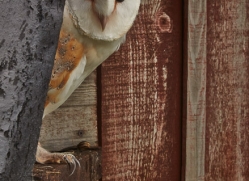 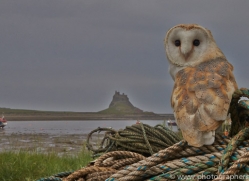 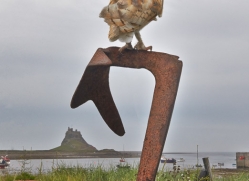 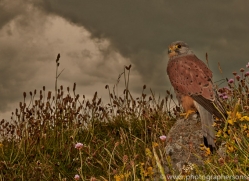 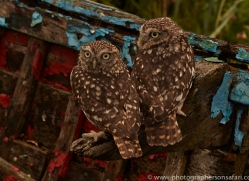 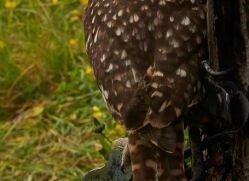 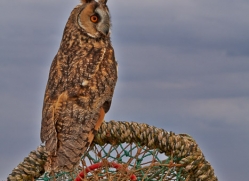 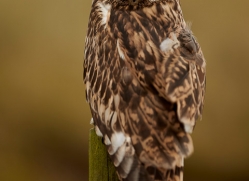 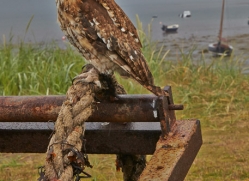 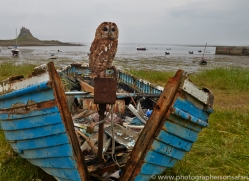 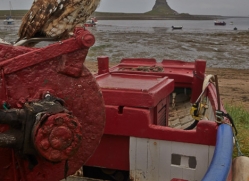